A Star Is
Shorn

First, there is a never-ending series of groomings and baths to make sure you always look your best for your followers. Next, you have to model a steady parade of costumes and props for dozens of seriously cute photos marking holidays, special occasions or just to satisfy your owner’s whims. If you make it to the big time, there may even be product sponsorships and more to keep you busy.

Mr. Rockwell, a five-year-old Goldendoodle owned by Samantha Fetta of Franklin, Tenn., is just such a busy dog celebrity. He has more than 18,000 followers on Instagram at mrrockwellthedoodle, and is adding more every week.

“I created an Instagram for him because I knew I was going to be taking a ton of pictures,” Fetta says. “I didn’t want to flood my friends’ feeds with pictures of my dog, so I created an account for him. The number of his followers grew pretty quickly, and when I realized that, I started using hashtags, hosting giveaways and collaborating with businesses and other Instagram accounts to increase his followers even more.”

Keeping up with such a busy celebrity schedule isn’t easy, even for a high-energy dog like a Goldendoodle, a breed that is a cross between a Golden Retriever and a Poodle. So when Fetta recently noticed that Mr. Rockwell wasn’t his usual rambunctious self, she became concerned. Symptoms began with a runny nose, followed by reverse sneezing. Since Mr. Rockwell had a history of sinonasal aspergillosis (SNA), it was time for a trip to the Animalia veterinary clinic in Franklin to see his regular veterinarian
and one of his biggest fans, Auburn alumna Dr. Lizzie Moser ’17.

Given his history, Moser immediately suspected a recurrence of SNA, a fungal
disease that can spread from the nasal passages into the sinuses. If left untreated,
it can also lead to more serious issues due to degradation and thinning of the patient’s cribriform plate, the bony separation between the sinuses and the brain.

“I thought it best to immediately refer Mr. Rockwell for a CT scan, as this type of fungal disease can recur,” Moser recalls. “The CT findings were concerning…and also revealed some thinning of the cribriform plate. This unfortunately made the typical treatment with the topical infusion of an anti-fungal—which was the way he had been treated previously—impossible, as you do not want to risk any drug going into the wrong location. At this point, surgery was recommended.”

“Mr. Rockwell’s owner really wanted to have a team of doctors who had seen this type of disease before,” Moser adds, “so we started discussing university vet programs. She knows I am an Auburn grad and therefore quite biased.”

While they discussed a possible referral, fate intervened. Fetta was visiting a friend in Auburn when Mr. Rockwell developed a serious nosebleed. The result was a trip to the emergency clinic at the Wilford and Kate Bailey Small Animal Hospital, where he received VIP treatment worthy of a canine star. From there, it was an easy decision to bring him to the CVM for surgery, and after Moser helped arrange a referral, Mr. Rockwell was soon on his way back to the Plains for more treatment.

“Dogs diagnosed with SNA usually have some degree of immune suppression at the level of their sinuses that allows fungi to infect and replicate within the nasal cavities and sinuses,” Muldoon notes. “This condition is typically treated with an anti-fungal medication called clotrimazole, applied directly to the sinuses and nasal cavities while the dog is under general anesthesia. It can also be treated with systemic anti-fungal medications given by mouth over a period of 6-8 months, as well as antibiotics to treat secondary bacterial infections and NSAIDs to treat inflammation.”

In Mr. Rockwell’s case, such treatments had already been tried and had failed to prevent a recurrence. In addition, the thinning of his cribriform plate meant that an infusion of clotrimazole could reach his brain, where it could possibly cause seizures, failure to recover from anesthesia, behavioral changes and even sudden death. Instead, the Auburn team decided to take the surgical route.

“The AUCVM Soft Tissue General Surgery Service performed a sinus trephination (frontal sinusotomy) into Mr. Rockwell’s left frontal sinus to retrieve biopsy samples
to confirm the SNA, then flushed his sinuses with sterile saline to clean them out,” Muldoon says. “This surgery basically involved drilling a small hole into the skull to access the sinus.

Once the procedure was complete, the hole in the skull was sutured closed and allowed to heal.

“Mr. Rockwell recovered extremely well and was released after only one night of hospitalization,” Muldoon adds. “’Since we couldn’t treat him with the topical infusion, he was sent home on a systemic anti-fungal medication called voriconazole, to be given by mouth for the next 6-8 months.”

Back home now, Mr. Rockwell is continuing with his rapid recovery. Fetta reports he “has all his energy back and is as goofy as ever.” His surgery at the Auburn CVM had other unexpected benefits as well, both for him and for his local veterinarian.

“Mr. Rockwell has been doing great,” says Moser, who is monitoring his recovery back in Franklin. “He and Samantha both loved their experience at Auburn, which made me so proud to be an alumnus! And the haircut on his face for his surgery has made him look like a lion, which only makes him more handsome.”

In addition, just as one would expect for a canine celebrity, he also left behind a whole new legion of fans in Auburn. “Mr. Rockwell was a dream to work with,” Muldoon says, “and he gathered quite the fan club here at the hospital! He was always content to sit by me while we waited our turn for diagnostics or if I needed to make some notes in his medical record. He is quite the ‘people dog.’ I am grateful to have had the chance to work with both him and his owner, and I am so glad he is doing great!” 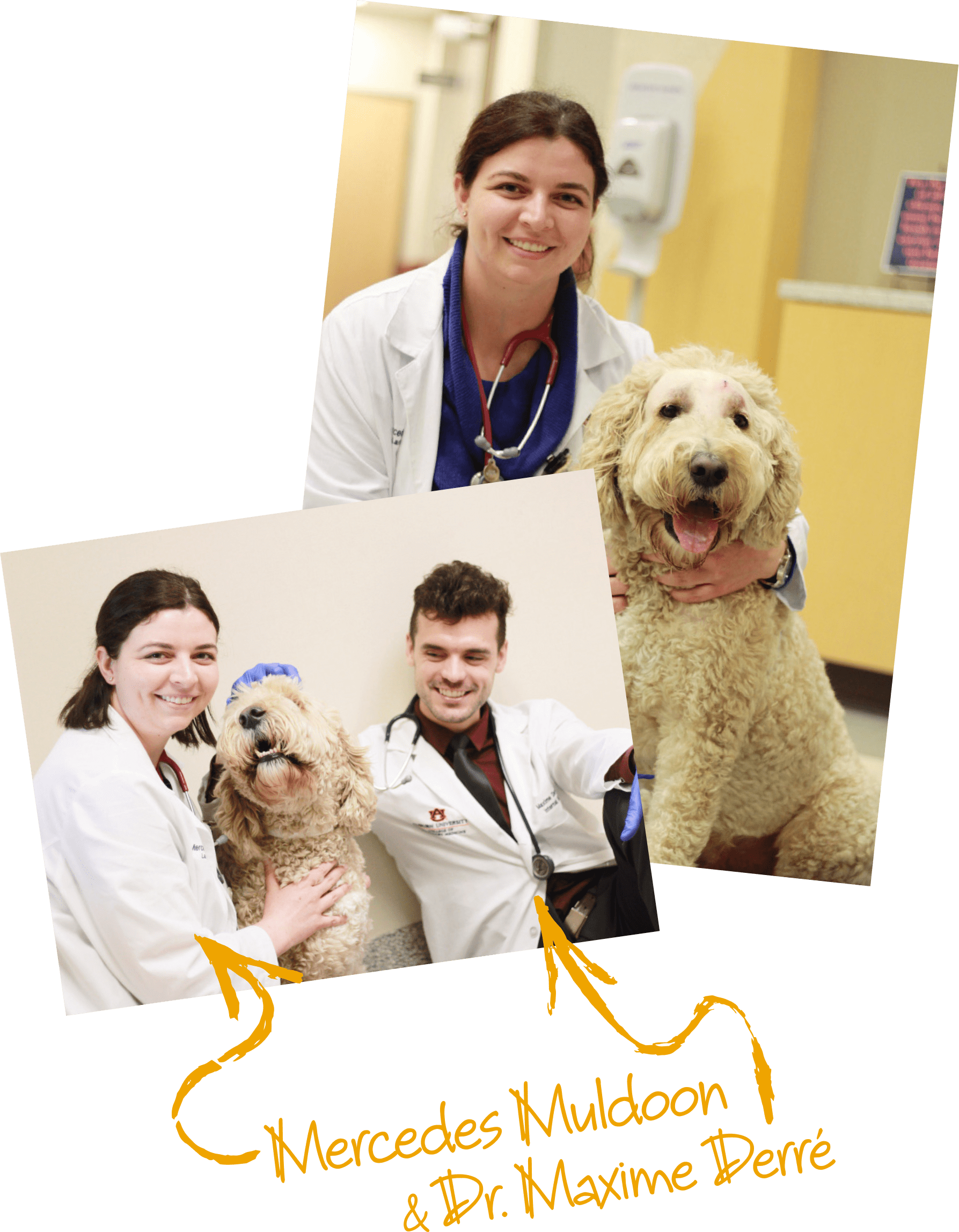