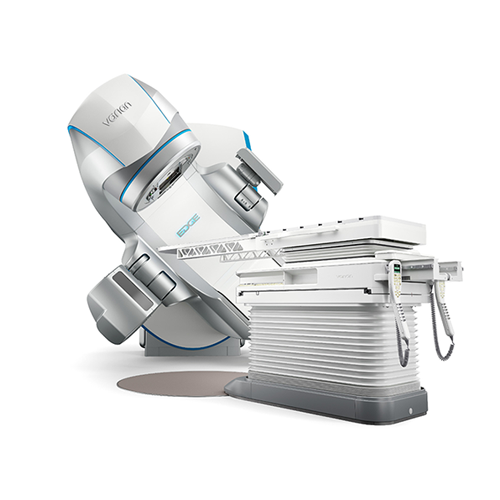 The diagnosis wasn’t totally unexpected, but it still came as a jolt to Barkley’s owners, who were used to their rambunctious, eight-year-old Labrador Retriever being the very picture of health.

The first indication of trouble had come a few weeks earlier, when Barkley became increasingly lethargic and seemed to be experiencing occasional problems jumping in and out of the car. At first, it had seemed to be a passing condition. But over the ensuing weeks, his owners noticed more unusual behavior and became concerned enough to take him to their local veterinarian, who recommended an MR I after an examination and initial tests. It was the scan results that revealed the bad news—an irregularly shaped mass in Barkley’s brain and a second, smaller tumor in his nasal cavity—both in difficult-to-access locations that made conventional surgeries risky, with only a limited chance of success.

Having prepared themselves for a difficult decision about Barkley’s future given his dire prognosis, his owners were surprised to find there was another option. Their veterinarian suggested referring Barkley to the Auburn College of Veterinary Medicine, where treatment of his tumors could be accomplished with a much greater hope of success and a positive outcome thanks to the college’s new Varian Edge, a state-of-the-art linear accelerator and the only one of its type and capabilities in veterinary use in the U.S.

Once Barkley arrived at Auburn, he and his owners met with members of Auburn’s radiation oncology team at the Wilford and Kate Bailey Small Animal Teaching Hospital, who examined his MR I and determined that he was a candidate for radiation therapy. While under anesthesia, a special mesh mask was molded around Barkley’s head to ensure it was positioned identically for his radiation therapy planning CT as it would be for his treatments. The radiation oncologist used sophisticated 3D computer planning software to maximize the dose to the nasal and brain masses, while minimizing the dose to the surrounding normal tissues. The planning only took one to two days, then the plan was double-checked by a medical physicist.

Once in the treatment room, a CT scan was used to ensure accurate positioning, and the treatment itself only took minutes. Thanks to the Varian Edge’s versatility, both tumors could be treated in one session, greatly reducing the stress on both Barkley and his owners. After short out-patient treatments on three consecutive days, Barkley was released. Less than a week had passed between referral by his local veterinarian and his completion of treatment.

Fortunately, Barkley the Labrador isn’t a real dog, but other pets with similar prognoses are now being treated regularly at Auburn, and the Varian Edge is making even the most difficult cases more treatable than ever before.

“The Varian Edge is an amazing tool,” said Dr. Greg Almond, DVM, MS, DACVR, associate clinical professor of radiation oncology in the Department of Clinical Sciences. “Not only does it allow for the most accurate delivery of treatment, it also enables faster delivery of radiation. In many of our cases, those advantages are critical.”

“We are incredibly fortunate to have this capability at auburn,” said Dr. Rancilio. “This machine is not a Cadillac or even a Ferrari. We asked for a Space Shuttle and the Dean got us one.”

Developed by Varian Medical Systems, the Edge system is a non-invasive alternative to traditional surgery that accurately targets tumors and other abnormalities without an incision or the need for recovery in a hospital setting. Its knife-like beam can target tumors of the brain, spine, lung, and other areas that are typically difficult to treat surgically.

Edge’s on-board imaging fine-tunes the patient’s position prior to treatment. By establishing optimal positioning—including the ability to adjust a patient’s pitch, roll, and rotation—the radiation dose to surrounding healthy tissue is minimized. A sophisticated treatment couch provides six different axes of motion. The Edge machine then rotates around the patient to deliver the treatment beams from nearly any angle.

This flexibility enhances treatment precision by providing multiple angles of attack for targeting tumors, while minimizing exposure of nearby critical organs. With the Edge system, treatments can be performed with ease, precision, and speed—often in just minutes per day. A traditional radiosurgery that typically takes 30 to 60 minutes may be completed in just five to 20 minutes. This matters, because faster radiosurgery treatments can be less traumatic on the patient. Independent studies have also shown that with faster treatments, there is less time for tumor and patient movement.

The Edge is more sophisticated than the machine in many human treatment facilities. Not only is the Edge capable of sophisticated stereotactic radiation therapy,” said Dr. Almond, in referring to the technology’s incredibly accurate, three-dimensional positioning capability, “it has all the functionality of the old machine.“

We are able to use on-board imaging—a CT scanner is built into the machine—to verify the tumor location and are able to move the couch so we know the tumor is where it is supposed to be with submillimeter accuracy.”The Edge system’s targeting accuracy is made possible by its sophisticated architecture, which synchronizes imaging, patient positioning, beam shaping, and dose delivery. To maintain that accuracy, the system even performs accuracy checks every ten milliseconds throughout the entire session.

To increase accuracy of the radiation therapy delivered, treatment beams are sculpted and shaped to match the three-dimensional shape of the targeted tumor. This is accomplished using an important accessory called a multi-leaf collimator (MLC), a device with 120 computer-controlled mechanical “leaves” or “fingers” that are moved to create radiation beams of different shapes and sizes. The MLC shape changes during the course of treatment to carefully target the tumor and protect surrounding tissues to the greatest extent possible. The college’s Edge has a high definition MLC, meaning that the inner leaves of the MLC are narrower (measuring only 2.5 mm in thickness each). This allows for even finer control of the dose to the tumor.

Any patient needing radiation therapy as part of their cancer plan is a likely candidate for Varian Edge, according to Dr. Almond. “We treat a lot of nasal tumors, soft tissue sarcomas, brain tumors, and oral tumors. Many tumors that were not previously amenable to radiation can be treated with the Edge,” he said. “One of the distinct advantages is we can sculpt the dose better on brain tumors. This is helpful for smaller tumors or ones adjacent to vital structures like the brain stem.

”What does all this mean for patients? The advantages are worth repeating. First, radiosurgery with the Edge system opens the door to treatment for animals that may not have many—if any—other options by allowing treatment of tumors in locations that are difficult to reach with conventional surgery and protecting healthy surrounding tissue thanks to its advanced targeting accuracy.

Second, the Edge’s accuracy allows the use of higher doses of tightly targeted radiation than those common in conventional radiation therapy, resulting in significantly shorter treatment sessions. Shorter treatments also mean a shorter time spent under anesthesia, reduced stress on the patient, and less interruption of clients’ and patients’ daily lives. In addition, the Edge can be used to treat more than one tumor per session and treatments can be repeated as necessary.