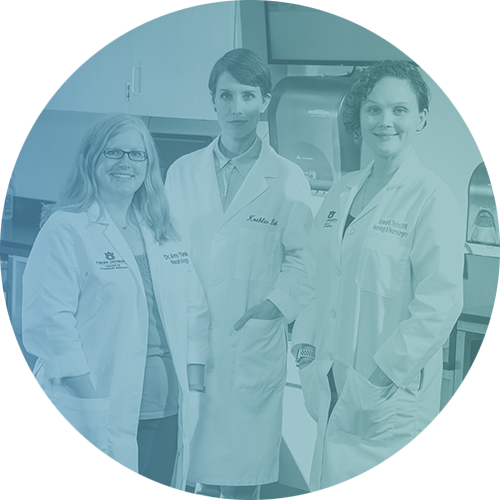 People and animals suffering from the deadliest form of brain cancer are undergoing similar treatment in an NIH-funded clinical trial through the University of Alabama at Birmingham, Auburn University’s College of Veterinary Medicine and two other Southeastern veterinary programs.

Veterinarians and human medical doctors are collaborating on an NIH-funded clinical trial in which the same immunotherapy is being used to treat people and dogs with glioma, the most aggressive form of brain cancer. Dogs and humans develop malignant brain tumors at about the same rate and with similar biology.

Renee Chambers, who holds a DVM from Auburn and MD from UAB, received NIH funding for a multi-institutional consortium to evaluate immunotherapy for glioma tumors, the same type of brain cancer as that of late Sen. John McCain.

CANINE (CANine ImmunoNEurotherapeutics) is a multi-center study to investigate immunotherapy for dogs with malignant brain tumors. Collaborators from around the country, including regional veterinarians at Auburn, Mississippi State and Georgia, are treating canine gliomas as part of this study. Treatment is paid for entirely by the study and includes surgery to remove all or most of the tumor, followed by treatment with a cancer-killing virus and checkpoint inhibitor in some cases, as well as all post-operative imaging, hospitalization, and all scheduled postoperative visits.

The oncolytic virus, M032, is a genetically engineered virus currently being used in FDA-approved human trials at UAB. In the canine trial, M032 is injected directly into the tumor bed shortly after surgery and can replicate in and destroy glioma tumor cells without affecting healthy brain cells. M032 also causes tumor cells to secrete an immune-stimu-lating protein (IL-12) before tumor cells die, which increases the anti-tumor immune response.

Dogs diagnosed with a suspected glioma brain tumor based on MR I imaging are eligible for enrollment in the study. Pet owners are responsible for costs of the initial referral exam and diagnostics leading to a brain tumor diagnosis.

“Through this clinical trial, dogs have access to incredibly sophisticated treatment and medicines,” said Koehler.

“This clinical trial is highly unusual in that the same treatment is being used in animals and people at the same time,” Yanke said. “We are at the forefront of medical treatment.”

At Auburn, dogs with suspected or diagnosed brain cancer will be seen by the Neurology and Neurosurgery Service at the Bailey Small Animal Teaching Hospital. With consent from owners, surgery will be conducted to remove all or part of the tumor. Histopathologic analysis will determine the exact type of brain tumor and, if a glioma, the dog can be enrolled in the trial.

Dog breeds that most typically are diagnosed with brain tumors include Boston terriers, French bulldogs, and boxers. Brain tumor deaths are thought to be responsible for about 2 percent of cancer deaths in dogs.

Warning signs, according to Yanke, may include seizures, behavior changes, loss of vision and circling. “Some dogs are referred to us [by primary-care veterinarians] with signs.”

While not all pet owners enroll their pets in clinical trials, more and more owners are considering the treatment because of the quality of life for their pet and for the knowledge gained in a trial. “We are seeing clinical trials more often in both animal and human medicine,” Taylor said.

Koehler, who will oversee the pathologic diagnosis of the tumor, said another important part of the trial is looking at the immune response to the tumor. “An agent within the M032 [IL-12] is expected to stimulate the dog’s own immune system to help recognize and destroy cancer cells,” she said. “We are stimulating the immune system for it to recognize and destroy tumor cells to essentially help the body kill the tumor.”

“Brain tumors in dogs and humans are remarkably similar,” said Chambers. “They share similar rates of incidence and morbidity and mortality, and they share similar symptoms such as seizures, which is often the first symptom observed in both humans and dogs. Treatment is very much the same, too, with surgery, radiation and chemotherapy the standard of care.”

Chambers, who was trained as a veterinarian prior to becoming a physician neurosurgeon, brings a unique perspective on the link between human and canine tumors.“

There are many shared factors between people and their pet dogs,” she said. “Dogs live in our houses, sharing the same environment and the same sleep patterns, for example. Some lucky dogs even share a diet with their owners. The tumors have similar gross and histopathologic characteristics. It is not unreasonable to assume that the dog will be a highly useful model of human brain tumors.“

We anticipate that M032 will be as safe and effective in dogs as it has proven to be in humans,” Chambers said. “It opens up an exciting new research pathway, while providing the potential of a therapy that could benefit both humans and dogs with brain tumors.

The five-year, $2.6 million project is funded by the Moonshot Initiative through the Center for Cancer Research of the National Cancer Institute. The goal is to treat about 15 dogs per year at Auburn and the other participating veterinary schools.“

The hope is that this research will benefit both dogs and people,” Chambers said. “Given the relatively short lifespan of the dog compared to a human, the timetable for results is accelerated.

“We talk of ‘translational medicine,’ moving research from the laboratory bench to the hospital bedside. This project is a revolution in the approach, also translating research findings from human to animal and back to human, to the benefit of both.”

A passion for medicine led Renee Chambers to a career that suits her perfectly—a neurosurgeon who began her career as a veterinarian.

The 1986 Auburn DVM graduate has had a lifelong love of medicine, first as a veterinarian, and because of an interest in neurology, currently as a professor of neuro-surgery at the University of Alabama at Birmingham, specializing in brain tumor surgery and spine surgery.

A Birmingham native, she earned an undergraduate degree in biochemistry from Auburn University. When it came time to choose a veterinary program, she only looked to Auburn.

As a veterinary student, Chambers was drawn to neurology. “I remember finding neurology cases the most interesting. Dr. Don Sorjonen was always eager to teach and very knowledgeable. He continued to provide guidance after vet school and, in fact, was very encouraging to me as I considered medical school and neurosurgery. He was instrumental in developing preliminary data for the CANINE project,” Chambers said.

After she earned her DVM, Chambers practiced with veterinarians John Meadows, Carr Hyatt and Bob Crowe for about five years before medical school. “I continued to work with Dr. Crowe as a relief veterinarian during medical school.

”While a practicing veterinarian, Chambers said her most interesting cases were neurological. “Most memorable was a Boston terrier with an intracranial glioma,” she said. “This case really sparked my interest in brain tumors and reminded me of the similarities between people and pets.”

That interest, combined with the untimely death of her mother from an intracranial hemorrhage while Chambers was in veterinary school, made her think of pursuing a different career path.

“She had a congenital arterial vascular malformation that ruptured, and I remember lengthy conversations with Dr. Richard Morawetz, the chair of neurosurgery at UAB, and also with my brother and family about our risks and the risks of our children and grandchildren. A good bit of research and reading followed.

“Dr. Garber Galbraith, professor emeritus of neuro-surgery at UAB, later invited me to round with the team on weekends. This was a pivotal point directing my future career choice,” Chambers said.

In light of her academic background, it is understandable that Chambers is a strong proponent of the One Health initiative. It was her passion and current work in neurosurgery, veterinary medicine and her ongoing research comparing genomics of brain tumors that led to her current clinical trial CANINE, which is the “culmination of years of research in both fields—work by veterinarians, physicians, researchers and clinician-sci-entists.” She is a founding member of the Comparative Brain Tumor Consortium at the National Cancer Institute and her lab at UAB is dedicated to comparative oncology and genomics of brain tumors.

Chambers credits her veterinary career with her listening and communication abilities with patients. “Neurosurgeons are not known for their people skills, and I have many patients comment on my ability to listen and communicate my recommendations to them. I truly believe that this comes from my training as a veterinarian.

“I recall Dr. Bobby Horne teaching, ‘you can’t diagnose a condition until you know its name’ before sending us home to learn the names of all the juvenile bone diseases,” she said. “It was a common sense reminder to learn the basics, then build on that foundation. I came to medical school with an amazing foundation upon which to build,” she said. “With the addition of a species, it involved a lot of repetition, also essential for learning.”

Chambers also credits her experience in research and time spent in the small animal clinic as a senior resident as invaluable during medical school and neurosurgical residency. “My surgical skills were far above average.”

Anytime Chambers wants to return to her roots as a veterinarian, she can do more than rely on her past career. Her husband is renowned orthopedic veterinarian Jimmy Milton ’67, DVM, MS, ACVS, and professor emeritus at Auburn.

The two were reacquainted at a Jefferson County Veterinary Medical Association meeting after Milton retired from the College of Veterinary Medicine and moved to Birmingham to establish Veterinary Surgery of Birmingham, and Chambers was invited by Shane West, DVM, to discuss her relief work.

“The Auburn tradition continues with two of our seven grandchildren at Auburn,” Chambers said.