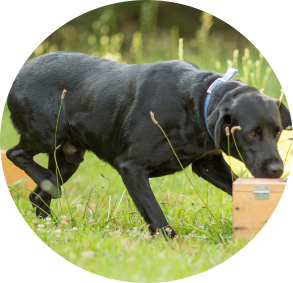 Detector dogs are used successfully world-wide, but the program at the College of Veterinary Medicine that has been a driving force in developing detection dogs and refining their capabilities is advancing technology to the next level in the exciting arena of biodetection.

Conducted under Canine Performance Sciences, co-directors Craig Angle and Paul Waggoner, together with co-investigator Dr. Thomas Passler, conduct research that uses odor-sensing capabilities of dogs to detect and discern viral pathogens. The technology may soon be used to detect a variety of infectious agents and diseases that pose a threat to public health—including cancer.

CPS has a distinguished pedigree of developing detector dogs and their effective capabilities for security, conservation, agricultural, and biomedical applications. Beginning in the late 1980s, CPS has evolved into one of the world’s leading research and development/training programs for detector dog technologies.

Dogs bred and trained through Auburn’s program work globally in law enforcement, the military, homeland security, and various other public worked security in the Olympics, at the Super Bowl, at national sports stadiums and coliseums for the NFL, NHL, NBA and Major League Baseball events, presidential events, military combat operations throughout the world, and in airports. In fact, the “Auburn Dog” is being employed by the New York City Police Department, Disney, the U.S. Capitol Police, and many agencies committed to public safety. Auburn dogs also have been used effectively in environmental and wildlife detection-management-control applications. Auburn-trained detector dogs were part of a recent multi-team effort with University of Florida’s Institute of Food and Agricultural Sciences and the Florida Fish and Wildlife Conservation Commission in projects locating and removing Burmese pythons from environmentally sensitive areas in the Florida Everglades. The CPS program also led research and development efforts that produced the unique Vapor Wake® Detection Dog technology for which Auburn holds a patent.

“We have always endeavored to innovate and use the dog’s capability,” said Dr. Waggoner. “People usually associate detection dogs with explosives or drug detection, but biological targets are also a threat. There are pathogens that can potentially contaminate our food, our air, our water and other aspects of the environment that can harm people and livestock. This led us to look at new ways to use and develop the dog’s detection ability.”

Dogs possess five qualities that are essential for biological detection, said Dr. Angle: (1) extreme analytical sensitivity in the parts per trillion range (equivalent to 1 second in the last 31,500 years); (2) real-time discrimination of complex odor profiles; (3) ability to trace an odor to its source; (4) ability to efficiently search large areas and populations for biological targets; and (5) ability to sample odors in environmental extremes, including high particulate densities in the air.

The CPS pathogen detection research program began just more than a year ago. Using viral pathogens found in cattle as training aids, the Auburn CVM team has made significant strides.

“We found fairly quickly that the dog could detect a virus,” Dr. Angle said. “We also know that a dog can be trained to discern different types of viruses.”

The Auburn team members have co-authored several peer-reviewed papers on their research in the area of canines and biodetection. One recent article published in Frontiers in Veterinary Medicine(June 2016) discusses how dogs use the volatilome (the odors emitted from a biological system) to identify differences between biological targets. A second article shows that dogs can discriminate between different viruses in cultures by smelling the volatilome above the cell culture.

“We used a bovine virus (BVDV) because it is a virus that is not contagious to dogs or humans,” added Dr. Passler, an associate professor in the Department of Clinical Sciences, whose research is focused on detection of viral pathogens and infectious diseases.

The investigators describe a volatilome as the entire set of volatile organic compounds (VOC), or odors, produced by an organism. The accumulation of VOC both inside and outside of the body reflects and indicates the unique metabolic state of the organism. In other words, the VOC is an indicator of health and the presence of pathogenic contaminants and diseases.

“We have been able to trap cell culture odors in media successfully using a technology developed by the National Institute for Standards and Technology (NIST) and then autoclave the NIST media and odors for one hour,” Dr. Angle said. “This allows us to take pathogen odors outside of a biosafety lab and use them for training dogs to detect pathogens in operational environments without risk. Importantly, this enables us to provide the dog with real-world scenarios for pathogens infecting our crops, livestock, and humans. We are currently measuring the dog’s ability to not only be trained on the NIST media but to identify an actual pathogen when they come across it in operations. The results are promising.”

Training dogs in this program is similar in structure to training other types of detector dogs, such as for explosives or drug detection. The dog works with a canine instructor for about three months to develop its detection and discrimination skills. Depending on the abilities and the operational requirements of the individual dog, training may last up to about six months. However, virus identification and discrimination training is complex compared to explosives or drug detection training, Dr. Angle said.

“We are teaching dogs to identify only the viral-as-sociated odors in a cell culture,” Dr. Angle said. “We don’t know exactly what those viral odors are because the dog can detect odors at an order of magnitude lower than our most sensitive analytical devices. There are an estimated 500-plus odors given off by a cell culture and we are teaching the dogs to identify a small percentage of that odor profile,” Dr. Angle added. “It only takes the dog 0.2 seconds to sniff the 500-plus odor profiles of a cell culture and decide whether the cell culture has the target virus in it. That [0.2 seconds] is not enough time for you to read and interpret a four-letter word, but it is enough time for the dog to interpret a 500-plus odor profile. Their analytical capabilities are off the charts.”

Dr. Passler, who has conducted previous research using the BVDV model, added that their research thus far has surpassed even their most lofty hopes.“

BVDV leaves no visual indicator that it is present in a cell culture,” Dr. Passler said. “In the beginning, we were not sure that a dog could detect scents associated with the virus. It is impressive just how well and how accurately they ca n.”

The project, technically, is still in the data-gathering phase, according to the researchers. With marked success in the laboratory phase of this program, the team is working to take training from the lab into the real world.

“We now have to develop a way to take this training aid from the lab into the real environment,” Dr. Waggoner said. “Dogs learn in a collateral fashion. We need to train them in the environment that they ultimately will be working in.”

Research has shown that dogs have the ability to smell odors produced by a variety of infectious diseases. Different patterns of VOC expression are associated with different diseases including asthma, diabetes, cystic fibrosis, pulmonary diseases, various bowel syndromes and cancer. Dogs represent the most capable real-time mobile detection technology available for disease and pathogen detection in operational environments, according to the research team.“

There is not another technology capable of doing what the dog can do in biodetection,” Dr. Angle said. “We have shown that dogs are able to accurately detect and discern among different forms of viruses. We now have to bridge the gap between the virus in the lab and the virus in the real-world environment.”

“Purpose-bred detection dogs have a demonstrated ability to search for unique odor patterns and identify specific targets in field conditions,” the researchers wrote.