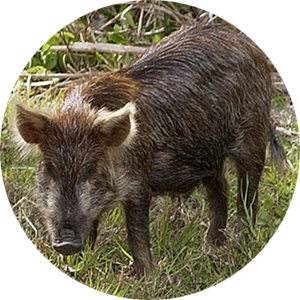 Wild pigs have become an overpopulation problem throughout the Southeast and other parts of the United States, causing billions of dollars in damage to agriculture and the environment and posing health concerns.

A multidisciplinary research team in the College of Veterinary Medicine and the School of Forestry and Wildlife Sciences is developing contraceptive vaccines as a potential wild pig population control tool. The immunocontraception technology could be commercialized in the near future.

Immunocontraception involves vaccines that, when administered to animals, will induce immune responses—similar to anti-disease vaccines—that prevent reproduction, explain the researchers. The immunocontraceptive being developed by the Auburn team is designed to affect only the pig and would be administered orally by applying it to the pig’s food source.

“This is compelling technology,” said Cary Chandler, director of business development for AU’s Office of Innovation and Commercialization. “Moreover, manufacture of the vaccines can be done using current production methods and equipment.”

The uniqueness of the Auburn development is its targeting ability, according to the researchers. Presently available animal contraceptives are not selective and can affect multiple species. Thus, they cannot be permitted or licensed for use in uncontrolled environments, such as wild pig habitats. The Auburn technology, however, is designed to be species-specific, enabling its consideration for wild pig population control. Additionally, the vaccines are inexpensive to produce and stable under different environmental conditions.

In earlier research involving intramuscular and nasal delivery, the AU vaccines successfully induced immune responses in pigs. Further, as is required for a species-specific response, the antibodies produced by pigs in response to vaccination bound to sperm cells from pigs, but not to those from other animals. These anti-sperm antibodies resulted in localization in the right places in the reproductive tract and showed that they would inhibit the sperm-egg binding necessary for fertilization. With success using other delivery methods at hand, the researchers now are focused on refining an effective oral delivery mechanism that can be applied safely in the wild.

Wild pigs are found in every county in Alabama and in more than 40 states nationwide. Because they have few natural predators, they are highly prolific and produce up to two litters of piglets per year. Wild pigs contaminate water and destroy crops and tree plantings. They also are identified as carriers of viral and bacterial diseases and parasites that affect wildlife, humans, pets and livestock. According to data compiled by the School of Forestry and Wildlife Sciences and the U.S. Department of Agriculture, wild and feral pigs cause some $44 million in agricultural and forestry damage in Alabama. Nationwide, that damage is estimated at more than $1.5 billion and rising.