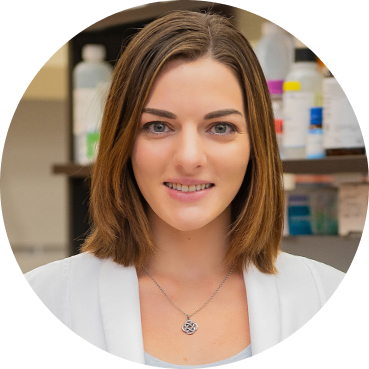 Francesca Mowry, a doctoral student in the Auburn University College of Veterinary Medicine, took the road less traveled on her way to becoming a key graduate assistant in the lab of Dr. Vinicia Biancardi, assistant professor of neurosciences in the Department of Anatomy, Physiology and Pharmacology.

Biancardi’s research centers on central nervous system mechanisms and their role in cardiovascular diseases, and her team studies the neurotransmitter, Angiotensin II, or AngII, and its role in interfering with the brain’s instructions regulating routine body functions. Neurotransmitters are chemical substances that serve as signaling devices to deliver those instructions from the brain, including to the cardiovascular system.

Mowry’s role in the Biancardi lab focuses on how inflammation within specific nuclei in the brain contributes to increases in blood pressure. More specifically, she studies how Angiotensin II interacts with the innate immune system to promote inflammation and oxidative stress within the brain, and the consequent maintenance of hypertension.

But Mowry’s route to becoming one of Biancardi’s most valued graduate assistants was hardly typical.

The Alpharetta, Georgia, native first earned her undergraduate degree in health sciences at Gettysburg College in Pennsylvania before coming to Auburn for a master’s degree and doctorate in kinesiology. She completed the master’s, but during the first semester of her doctoral studies, a seemingly whimsical course selection changed her career course for good.

“Out of pure curiosity,” Mowry said, “I enrolled as one of two graduate students in the fall histology course for Auburn veterinary students, and that seemingly inconsequential decision set everything into motion. Simply put, I discovered a depth of passion I had never before experienced, spending hours staring in marvel through a microscope long after the rest of the class had gone home.”

Mowry realized it was not the exercise, but rather the physiology that she adored. It was through sheer determination to find a place in the Department of Anatomy, Physiology and Pharmacology that she reached out to Biancardi, a new faculty member with a lab, but no graduate student.

“If you think this sort of general interest is an odd way to get involved in research, I agree whole-heartedly,” Mowry said. “Dr. Biancardi’s work focused on the role of the brain in hypertension, and, in a ranked list of my favorite biological systems, the central nervous system was dead last. Yet, there I was, begging to join
her lab. She was making breakthroughs in understanding the mechanisms behind one of the most prevalent diseases in the world, and I knew I needed to do whatever it took to work with her.”

The rest, as they say, is history.

Despite her unusual route to finding her true passion, Biancardi was impressed enough with Mowry to accept her as a graduate assistant, and the late convert to physiology studies has never looked back.

In 2020 alone, she has been recognized as the winner of the Van Harreveld Memorial Award from the American Physiological Society; the New Investigator Travel Award, presented by the Council of Hypertension of the American Heart Association; and the College of Veterinary Medicine’s Dr. Charles H. Courtney Award, presented to a student demonstrating outstanding research ability.

“Francesca is an incredibly hard worker,” Biancardi said proudly. “During her years in the Ph.D. program, she has been author or co-author of both original and review manuscripts. Additionally, she has received numerous awards and travel fellowships at multiple conferences. On top of that, she also serves as a graduate teaching assistant for histology and a First-Year Experience mentor for other graduate students. She is driven and passionate about everything she does.”