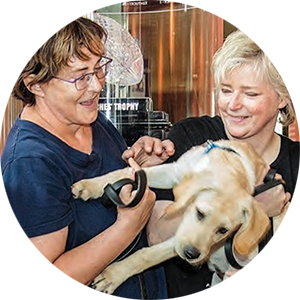 After spending a day with the Canine Performance Sciences team, don’t be surprised one day to see some of the highly intelligent work performed by detection dogs in one of her acclaimed crime novels.

“It’s amazing to see the different things that purpose-bred dogs can be taught to do, and the research and training that is going on at Auburn,” Slaughter said after spending the day with the CPS team, watching them train canines and learning about ongoing research. “The work is fascinating.

“The interaction the handlers and trainers have with the animals is incredible. They are finely tuned to each other.”

Slaughter became interested in learning more about the program “to understand the different animal facilities, and the programs attached to police work. I also have a personal love of animals.”

Slaughter, a Georgia resident who has written 16 books including the recently-released novel, The Kept Woman, has supported the program and shows off CPS canines on her social media. The staff named a litter of pups after one of the author’s most popular characters and book series, Will Trent.

When Lily, a five-year-old Labrador retriever delivered four pups last March, one male and three females, the CPS team decided to name the litter after some of Slaughter’s most recognized characters: Will Trent, Faith, Amanda and Sara.

“It’s really funny how the dogs’ personalities fit my characters,” she said. “For instance, Will Trent is big and kind of bumbling, and Amanda is snippy.”

And while Slaughter included animals in her books in the past, an extension of her own love for animals, they’ve never had a leading role in one of her books. After visiting the CPS facilities and speaking with trainers and researchers, that may change. “I’d love to explore more and write about how animals can be valuable to the men and women working in law enforcement.”

Slaughter said after learning about the program, it is important on many levels. Certainly the Vapor Wake detection dogs, which got their start at Auburn, are significant. So is the bite prevention program that is being offered to local schools, the education of veterinary students who are there for the breeding and healthcare of the dogs, and the fact that prison inmates who assist with training have an opportunity to learn new skills that could benefit them socially and economically once they are outside the prison walls.

“These programs are like dropping a pebble in the water. The impact ripples out in so many positive ways.”