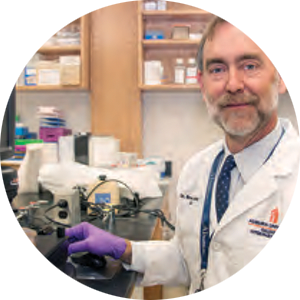 “I don’t want to overstate it, but it’s a revolution—a complete revolution,” said Dr. Bruce Smith, director of the Auburn University Research Initiative in Cancer (AURIC) and professor of patho- biology at the College of Veterinary Medicine.

“Eventually, you will treat cancer patients with chemotherapy and a therapeutic virus that is customized to their  tumor.  If the tumor were to come back, you would resequence, create a new therapeutic virus, then treat the patient again. It completely changes the way we will manage cancer.”

Smith and his team at the College of Veterinary Medicine worked with Gen9 and Autodesk to create a therapeutic virus to treat osteosarcoma, canine bone cancer. At 34,000 base pairs long, the virus is the longest synthetic virus ever created.

“I have to admit my initial response was disbelief,” he said. “It took us more than a year to create our first osteosarcoma-targeted therapeutic virus. Gen9’s ability to construct one in 10 weeks changes the game.”

Dogs get cancer at the same rate as people. They also get the same kinds of cancer that people do. For canine bone cancer, the survival rate with the current standard of care— amputation and chemotherapy—is less than 10 percent—that can increase a dog’s survival from nine to 12 months.

Using recombinant DNA techniques, Dr. Smith constructed a CRAd that will find and kill bone cancer cells at the tumor site. The rDNA virus also targets cancer cells that may have spread throughout the body after the tumor has been removed.

In January 2015, Autodesk’s Andrew Hessel called Dr. Smith with the idea of using synthetic biology techniques to accelerate the creation of therapeutic viruses tailored to each patient.

At Autodesk, Hessel leads a team of designers, programmers and scientists working on building software and hardware to simplify the design and fabrication of living things—including viruses. Hessel introduced Smith to Gen9.

“My first response was ‘that’s crazy,’” said Dr. Smith. “Cool, but crazy. It took us more

than a year to build the first virus and Andrew was talking about accelerating virus production and customizing each virus based on the genetic makeup of each tumor.”

“I’d worked with Gen9 to synthesize the bacte- riophage phi X 174, which is 5,000 base pairs,” said Hessel. “I watched the technology get better and better and in 2015, Kevin Munnelly told me they were routinely assembling 10,000 base pair sequences. I asked him when Gen9 could assemble a 30,000 base pair virus and he answered ‘very soon.’”

Gen9’s BioFab® DNA synthesis platform is the first and only industrialized chip-based technology for DNA synthesis. The company is able to produce long strands of DNA incredibly quickly and reliably using error correction and other technologies that enable production of 100% accurate DNA constructs.

“The scientists and engineers at Gen9 are focused on saving the world so Dr. Smith’s project got us excited even though the size of the virus would push the boundaries of our process and technology,” said Devin Leake, Ph.D., Gen9 vice president of research and development. After an initial conference call kick-off, Dr. Smith sent the Gen9 team an email file containing the DNA sequences of the virus.

“Initially, Devin predicted the virus would be finished in eight weeks, but it took 10,” said Dr. Smith. “When he realized it would take a little longer, he called to apologize. What he didn’t understand was I still didn’t believe Gen9 could deliver the virus in less than six months. It took 10 weeks.”

From 10 Weeks to One

Upon receiving the DNA, Dr. Smith and his team “booted up” the virus by transfecting dog bone cancer cells that expressed the sequence and produced more viral DNA. This process of infecting cells and collecting the virus continues until enough of the virus is available to infect dogs.

Then, the Auburn team will test the virus in tissue cultures to prove it only infects and replicates within osteosarcoma cells and not healthy ones.

“This collaboration speaks to how a team can come together to do a scientifically and clinically important research project, do it gracefully, and inexpensively,” said Hessel. “It also speaks to how synthetic biology will be conducted in the future. You have a design team, an engineering team, and a clinical research team that design, build, and test to learn and we all learned a lot.”

“This collaboration allowed us to prove our process is scalable in length,” said Leake. “That scalability, combined with the ability to create more complex sequences inexpensively, will change the way researchers conduct experiments. Instead of creating multiple DNA vectors by hand to conduct an experiment, scientists will simply order the sequence and its variants and use it. It is akin to the way we used to make buffers—now we just order them because they are so inexpensive.”

Dr. Smith estimates dogs will receive the treatment for the first time in 2017. When asked what’s next, Dr. Smith answers: “We’re working on a methodology to bring the synthesis timeframe from eight to 10 weeks to one week or less. Eventually, we want to create an intelligent system that would sequence the tumor and help a vet decide what therapeutic virus to build. Gen9’s technology is extremely powerful for making  personalized  treatments. It will make it possible to treat cancer in ways that we never have before.”