THE TALE OF DR. BRUNSTEIN AND 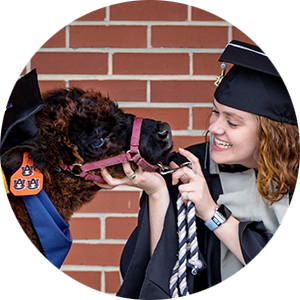 There is no shortage of stories about the lifelong friendships formed during four years of intense Auburn veterinary studies. Learning, working, laughing, crying — these are only a few of the words alumni use when reminiscing about the many situations encountered alongside their fellow classmates and how those friendships were formed.

But the friendship that blossomed between Dr. Kristin Brunstein ’21 and a little Belted Galloway calf, affectionately known as Miss Shorty, is somewhat different. One of these two lifelong friends has four legs.

During Brunstein’s final year of veterinary education, the newborn calf was brought to Auburn’s J. T. Vaughan Large Animal Hospital weighing a mere 16 pounds, suffering from severe hypothermia and a heart murmur and not nursing well. The premature calf’s owners eventually decided to donate her to Auburn. Clinicians and students worked around the clock to take care of the tiny calf and give her every possible chance to recover and grow.

“Miss Shorty and I met when I was on farm animal hospital rotation,” recalled Brunstein. “We were selecting our in-hospital patients and I picked her to be one of mine. I had heard from other classmates about her spunky personality, so I decided to be part of her journey.”

Soon, the calf’s heart murmur — diagnosed as tricuspid insufficiency — resolved without treatment while she was receiving nutritional support and care at the hospital. In January, she developed pneumonia along with an umbilical abscess, so she was scheduled for a surgical resection of the umbilicus once her pneumonia cleared.

Brunstein was the primary student in charge of Miss Shorty’s care during her two-week rotation, responsible for her daily physical exams, medications, bottle feedings and socialization. She also assisted Dr. Jenna Stockler during the surgical resection of the umbilicus and stayed with Miss Shorty after surgery to keep her warm and monitor her post-surgical recovery.

Today, Miss Shorty is a happy, healthy calf living her best life as part of a small herd of miniature Herefords and Belted Galloways on RJ Farms in Notasulga, Alabama. She was adopted by Robert and Janeva Cole, two of her Auburn caregivers, and went to her new home in February after almost two months at Auburn. The Coles are part of the Auburn Vet Med hospital team. Robert is an associate professor of radiology in the Department of Clinical Sciences and Janeva is an internal medicine veterinary nurse in the Bailey Small Animal Hospital.

“Miss Shorty showed me what being tough truly means,” Brunstein said of her four-legged friend. “From the beginning, she had the odds stacked against her, but she continued to fight and made it through. There were many people involved in her care and she left a lasting effect on all of us. The entire class of 2021 was rooting for her throughout her hospital stay. I was just the lucky one who got to help send Miss Shorty home to her new family.”