One Family,
One
Medicine

With 18 Auburn degrees, the Cartner-Murchison family ranks high among Auburn-laden family trees for loyalty. However, when eight of those 18 are veterinarians and four are medical doctors, the impact of One Medicine is undeniable.

The roots of this family tree are securely anchored by Sam Cartner ’83, DVM, and his wife, Agnes Murchison Cartner ’82, DVM, MD, prime examples of the versatility of an Auburn veterinary degree with their career successes in research and human medicine, respectively. On the newest branch of the family tree, their niece, Lockett Nelson, graduated with her 2020 Vet Med classmates this spring and plans a more traditional path into small or mixed animal practice. Together, this family represents what is possible with an Auburn degree and, specifically, with an Auburn DVM.

To see the beginning of the Cartner-Murchison Auburn connections, look to Agnes’ great uncle, George Matthews Marks, who came to Auburn in the late 1890s and learned from founding veterinary dean Charles Allen Cary. Before the era of the Auburn DVM, Marks earned API certification in veterinary science, chemistry and geology/minerology. His Auburn credentials are signed by legends Cary, Broun, Mell and Ross.

The common thread of incredible teaching throughout the Auburn Vet Med history is reflected by the vet school experiences of the Cartners and Nelson. To Agnes’ comment, “We had great professors and we were all a team,” Sam added, “The most important resource, still, is the faculty. Technology didn’t make the difference in our veterinary education. Instructors did. It was all about everybody getting through together. The instructors promoted that atmosphere.”

“As a student at Auburn,” Nelson said, “I have been taught by incredible professors, many of whom are Auburn Vet Med graduates themselves. The veterinarians at Auburn are amazing role models and encourage us to continue learning throughout our career. Many of the veterinarians that I admired while growing up, both relatives and friends, were Auburn graduates as well, and are quite successful.”

Sam and Agnes Cartner’s career journeys exhibit that lifelong learning. Post-graduation and after they married, the couple moved to Virginia, where Sam pursued dairy practice until an injury required a less physically demanding job. They moved to south Alabama, where Agnes worked nights at the Mobile Animal Emergency Clinic and Sam worked days at the Mobile County Health Department as environmental health services director.

They solved their opposing schedules in 1985, when Agnes began running the Gulf Coast Veterinary Hospital, which they opened together in Orange Beach, Alabama. Sam kept his other job, and helped with emergencies and on weekends. While Sam pursued his public health master’s, they continued to build their practice until 1989, when they moved to Birmingham for Agnes to begin medical school and Sam to pursue his Ph.D. in cellular and molecular pathology, both at the University of Alabama at Birmingham.

This change of career direction was precipitated by a family tragedy, the death of Agnes’ sister, Hettie Hopkins “Tutta” Murchison ’85, in an auto accident in 1988 during Tutta’s fourth year at the University of South Alabama medical school. Tutta was posthumously awarded her MD in 1988. Agnes had not envisioned an MD in her own future. But, with her sister’s death, she assumed the family mantle, set originally by their father, Grover Cleveland Murchison, who graduated first in his University of Alabama medical school class the generation before.

“When my sister died, I thought ‘somebody has got to be an MD,’” said Agnes. “My dad had been an MD. I was a veterinarian and my husband was a veterinarian. My other sister and brother-in-law, Cary Murchison Phillips and Rusty Phillips, were veterinarians. Sam was supportive, so we sold our veterinary practice and went
back to school.”

The other veterinarians among the family’s Auburn graduates include Sam’s brother, Jim Cartner ’79, and Murchison cousin Harry Blaylock ’77.

Agnes graduated with her MD in 1995, earning her specialty in radiology in 1999. She retired in January from Vulcan Imaging Associates in Birmingham after a career in women’s health imaging —mostly breast/breast cancer imaging.

Known for her skills and compassion as a patient advocate, Agnes associates her success with her Auburn veterinary studies. “I sign my name, ‘Agnes Cartner, DVM, MD.’ Someone asked me once, ‘Don’t you want to put your most important degree first?’ And I said, ‘Yes. I did.’”

The 2019 Bailey Distinguished Alumnus summarizes his roles by crediting his colleagues—a staff of 125—with proper treatment of animals under their care. “We care for the animals and provide the veterinary and research support to get research done,” said Sam. Whether navigating new equipment, funding or regulatory compliance, the priority is on the daily care of 150,000 animals to support 400 funded projects.

“One medicine—that’s my whole career,” said Sam. “What I do researching animals is going to help humans and is going to come back and help animals.
That’s my total dedication.”

“I’ve been so energized my whole career with what I learned in veterinary school—by how I could contribute to public health and animal health. You can do anything with that broad background of education.” In addition to running a traditional veterinary practice, Sam said, “You have the expertise to go into public health. You can go into human medicine like Agnes did. You can go into research like I did. As long as you have the energy and the drive, the education puts you there.”

Lockett Nelson, new DVM graduate and associate veterinarian at Harrisonburg (Virginia) Animal Hospital, also recognizes the interconnections between animal and human health and said that a one-medicine understanding has been an important part of her Auburn Vet Med studies. 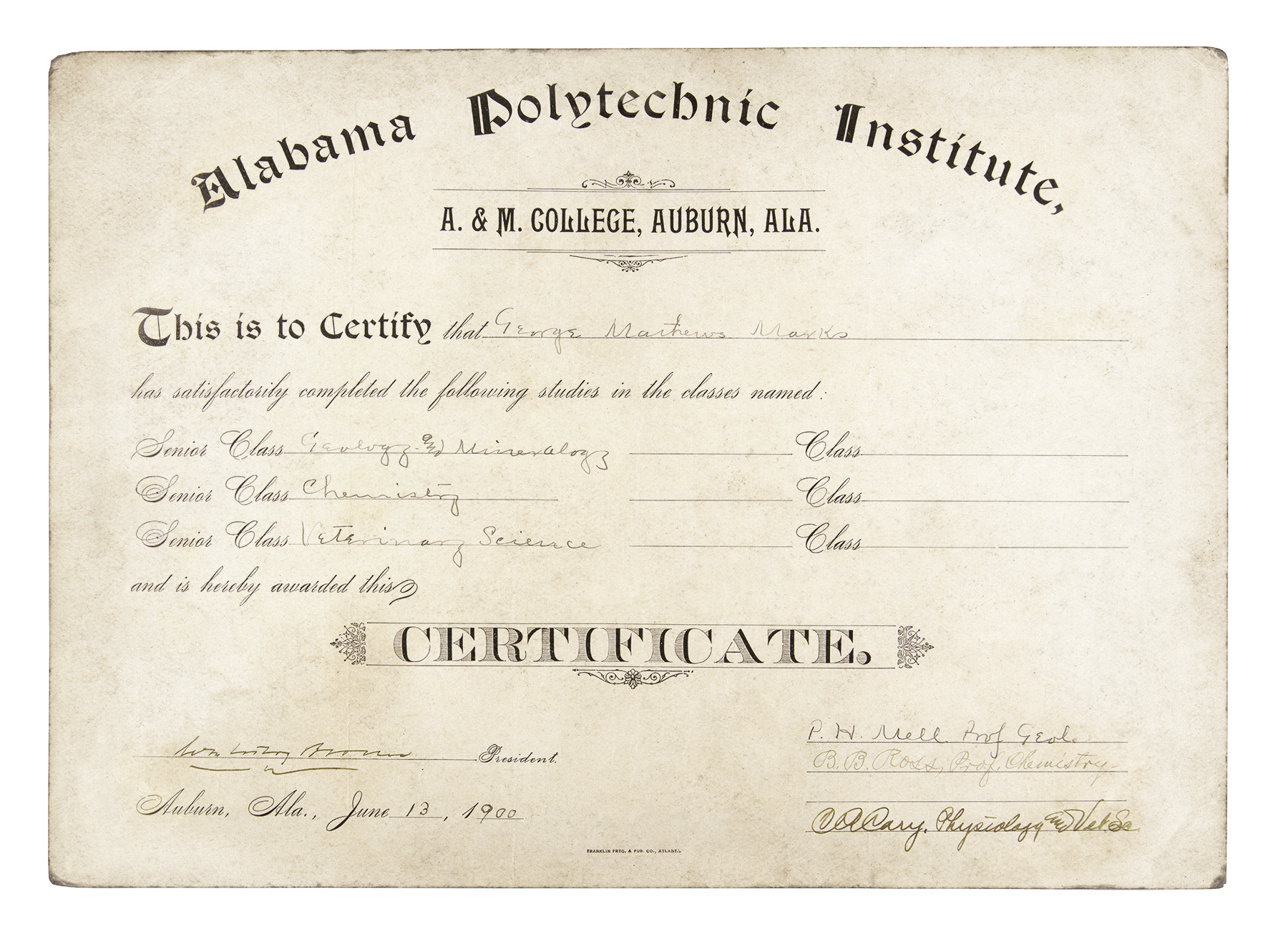 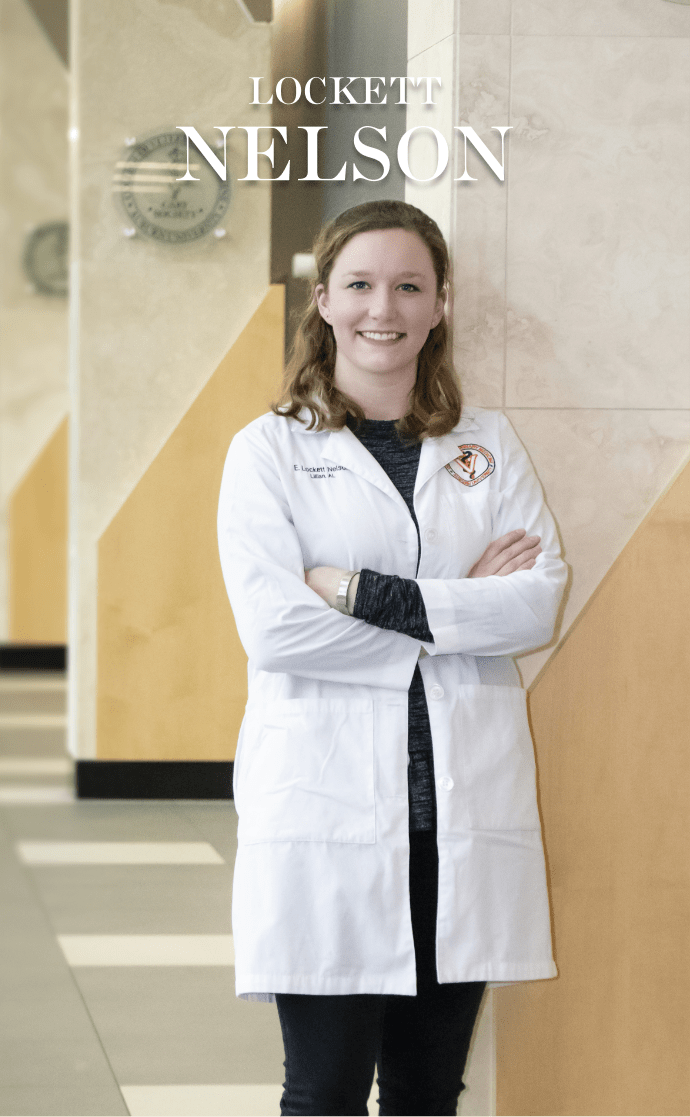 “Human and environmental health are vital components of practicing quality veterinary medicine,” she said. “Our education at Auburn included courses on epidemiology and food safety. We also constantly learned about important zoonotic diseases.”

As an MD, Agnes has also seen how veterinary medicine enhances human medicine. Her Auburn education prefaced her success in medical school where, she said, “the majority of the top ten students were from Auburn. I would put veterinary school classmates up against my med school classmates any day—for intelligence, for passion, for love for their patients.

“People go into veterinary medicine because they love animals. They want to help them and decrease pain. At Auburn, the thing that’s never going to change is that empathy, that love for the animals.”

While Auburn Vet Med core principles remain constant, there are obvious changes, such as facilities and teaching hospital growth, when Lockett and her relatives compare eras. Another change is gender makeup. When Agnes was in school, female veterinary students were in the minority; now males are the minority. “It was a time of breaking barriers,” she said.

Sam commented on the evolving nature of the curriculum. “Veterinary medicine changes with the science. When we went through, they weren’t teaching molecular medicine. Now, veterinary medicine is leading the enterprise—championing stem cell research, doing molecular genetics, modifying genes to cure diseases. It’s all done by veterinarians.”

With the influence of her aunts and uncles, Lockett always considered being a veterinarian, but she wasn’t sure until high school. “Aunt Cary and Uncle Rusty let me work for them at their Montgomery practice when I was 13.” As a veterinary student, Lockett helped her other uncle, Sam, with caring for piglets over a weekend, and enlisted fellow CVM students to travel to Birmingham and assist at a crucial stage in
a transplant research project.

“My favorite part of vet school was being surrounded by people who share my love of animals and passion for their welfare,” Lockett said. “I have made lifelong friendships. I was surrounded by experts in many specialties. I loved being able to communicate with professors and classmates about cases and constantly learned new things.

“Auburn’s College of Veterinary Medicine fosters a culture of tradition and curiosity. I know that, even as decades pass, Auburn will always be a home for me, just like it is for many of my aunts, uncles and cousins.” 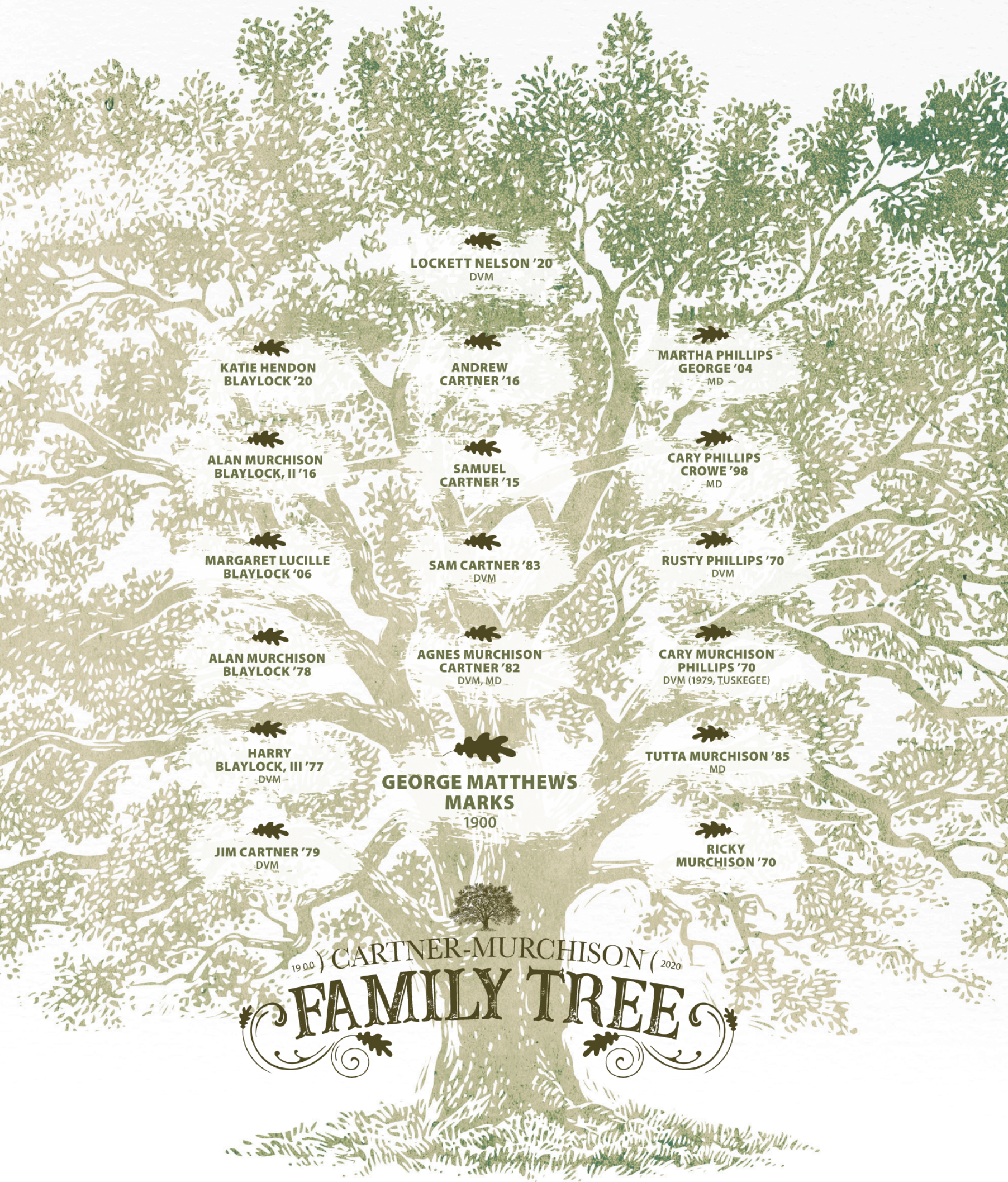