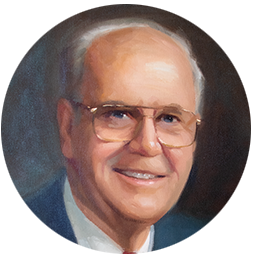 March 2, 2021, marked the 100th anniversary of the birth of one of Auburn University College of Veterinary Medicine’s most beloved figures. The date noted the

centennial of the birth of the late Wilford S. Bailey ’42, namesake, along with wife Kate, of the Small Animal Teaching Hospital; president-emeritus of Auburn University; and member of the Auburn Vet Med faculty for 50 years.

After a remarkable career in which he earned an additional doctorate from Johns Hopkins University and served in a variety of administrative and teaching leadership roles at Auburn, the USDA and the National Institutes of Health, Bailey was days away from his 62nd birthday and retirement when he accepted an appointment as Auburn University interim president in 1983. His success in that role prompted the Auburn Board of Trustees to confer on him the full title of president retroactively in 1984. He later went on to serve as president of the National Collegiate Athletic Association (NCAA) in 1987-1988 and as Auburn’s first University Professor until his final retirement in 1992.

Wilford Bailey will be numbered among the most outstanding leaders of Auburn University in its 144-year history,” Philpott said. “As a teacher, administrator, president and one who always sought the highest standards for the university, he will be remembered for eternity.”